My maternal and paternal grandparents made their living off the land in the area of Lisburn, which is now a major City in Northern Ireland, but in those days (1940’s and ’50s) was just a sizeable market town about 8 miles south-west of Belfast.

My mother’s folks were humble, but hardworking, farmers with cattle and lovely arable land which afforded a beautiful vista over Belfast from the

Ballymullan hills. All the ground was based round a little cottage, in which five children (four girls and a boy) had been brought up, and although the facilities were primitive, it had a lovely

warmth about it….maybe the subject of another post. You could walk to anywhere on their farm within 15 minutes so it was not extensive. They grew potatoes and wheat, along with hens, pigs, and their herd of cows, which provided the farm with eggs and milk, as well as some income. I don’t remember horses being used but the ‘Wee Grey Fergie’ tractor was where I started to learn to drive about the age of 11′
On the other hand, my father came from what must have been

a relatively-wealthy family. All the photos I have from two generations back, are smartly-dressed men and women, posing with staff in front of large houses. The 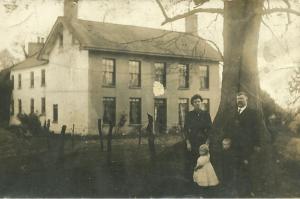 Monroe family was well-known in Irish history, (specifically in this area) although this was not really discussed at the time. They had an agricultural contracting company (to do work for local farmers who did not have, or require, the expensive machinery), bus company, brickworks, a large farm, workers houses etc and as far as I know.the road was named after the Belsize House where they lived. With little imagination the company was called ‘Monroe Bros’

So there were two quite different families in the same area, and the common link was the marriage of my mother and father in 1943.

My mother had worked in some office in Belfast so was aware of accounting practices. It appears that she took on the position of Book-keeper within the

It makes wonderfully-interesting reading, at least for the family, as many of the customers of the agricultural contracting business were individuals (or their descendents) whose names were mentioned regularly in our childhood, but we as children would never meet them. There were also titled people whose estates obviously needed extra help during the ploughing, planting and harvesting seasons.

The various activities involved in this business were numerous, and many would not be known to urban dwellers and the costs are well detailed. They included the following (with modern-day coinage in brackets):-

But the one set of entries which intrigued me most was the one, in 1944, where my father’s father’s business did work for my mother’s father’s farm at Ballymullan. It came to £14.16.00p, a not-insubstantial sum. It may have been that the bill could not be paid immediately due to a cash flow problem, but the accounts show quite clearly that cash of £4/16/- was paid on 16th October 1944, with the £10 balance being paid-for by 2 tons of potatoes!

I have no way of confirming the value of potatoes in 1944, so cannot comment on which side felt they had done well out of the deal, so perhaps someone can enlighten me if such information would be available…….